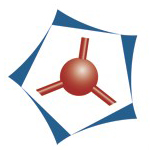 During recent years we concentrated our research efforts on a novel human protein of 274 amino acid residues and 46 kDa apparent molecular sice. We call it Hap46 for "hsp70/hsc70-associating protein" as hsp70 and hsc70 molecular chaperones are the primary interaction partners. Through these chaperones a host of unrelated proteins - including various transcription factors - can interact with Hap46. Interaction of Hap46 occcurs with the ATP binding domain of hsp70/hsc70 and affects ATP binding as well as protein folding properties. Potential contact sites on hsc70 were identified by peptide scanning and phage display methods. They form clusters on either side of the central cleft of the ATP-domain, readily explaining the effect of Hap46 on the nucleotide binding site.

We dicovered that Hap46 is a bifunctional protein: by making use of different domains it interacts with hsp70s and with DNA. Amino terminal sequences were found to be required for binding to DNA and site directed mutagenesis revealed that several of the positively charged residues within this region are involved. In vitro and in vivo transcription experiments show stimulatory effects of Hap46. In intact cells this is particularly prevalent after thermal stress.

We also investigated the large isoform of Hap46, called Hap50, which has an amino terminal extension of 71 residues. While Hap50 resides in cell nuclei to begin with, Hap46 is localized in the cytoplasm and transfers to nuclei only under heat stress conditions. Upon overexpression by transient transfection of cells, Hap50 constitutively stimulates the expression of a variety of genes. Concommitant with this transcriptional activation we observe a cell protective effect of Hap46 and Hap50 upon heat stress. Further studies are devoted to the mechanism(s) by which Hap46 and Hap50 affect the transcriptional apparatus of the cell.